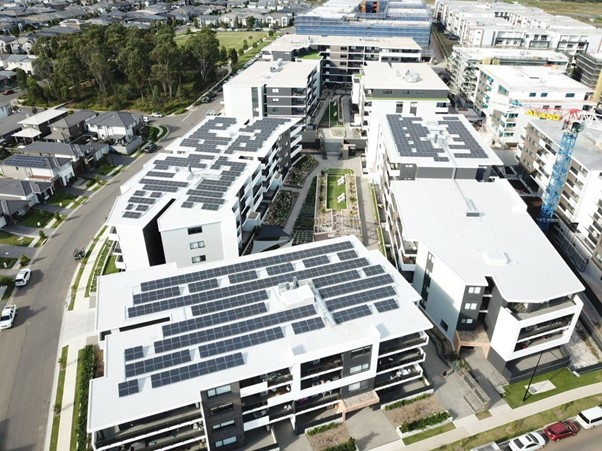 It’s fair to say that Australia is obsessed with sustainability right now, with many businesses eager to do their part towards building a greener future. Part of this shift to renewables is unlocking the benefits of solar power through initiatives that provide cost-effective energy solutions for consumers while also helping reduce carbon emissions.

What is Energy Locals’ Ground-breaking Solar and Battery Solution in Sydney Apartment Building?

Accessing the benefits of onsite solar power has traditionally been a challenge for apartment owners and renters, however Energy Locals (whose Community Energy Network arm of the business also goes by the name Energy Trade) has delivered a bespoke energy solution for ALAND’s Schofield Gardens complex. A more sustainable way of living has been made possible by Energy Locals through its installation of 201kW of solar panels and 24 Tesla Powerwalls.

Not only is this project Australia’s largest Tesla Powerwall installation in a residential dwelling, but it was also done so at zero capital cost to residents. Energy Locals claims it was committed to future-proofing this complex during the planning, design and implantation stages, while also creating a positive impact on the environment.

“A mountain of work went on behind the scenes to make this a reality so we’re proud this Energy Locals initiative has been recognised and we hope it encourages the adoption of sustainable energy solutions in more communities,” said Adrian Merrick, Energy Locals Founder and CEO. 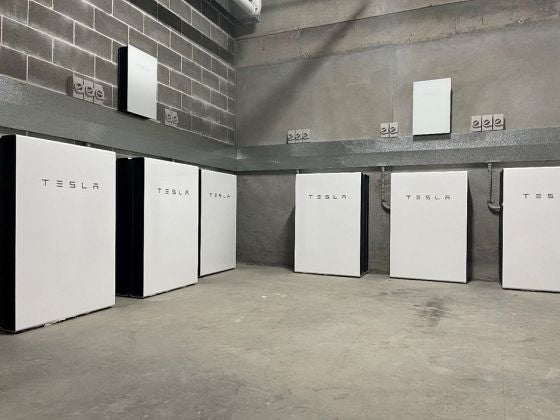 This green initiative allows residents to reap the rewards of relying less on grid electricity. It does so by capturing solar power through its PV panels and storing it in batteries that are used to offset the building’s energy usage. Due to the configuration of the solar and battery installation, Energy Locals can shift the peak demand of the complex, reducing power usage when electricity demand is at its peak.

By shifting peak demand, the Schofield Gardens complex also relieves pressure on the electricity network. Furthermore, Energy Locals can capture electricity that’s produced during the day and on-sell it throughout non-solar generation periods, such as overnight or when there’s inclement weather.

“In its submission to Canstar Blue, Energy Locals claims the project is expected to reduce 203 tonnes of carbon dioxide per year, which in itself is a remarkable achievement,” said Canstar Blue’s Energy Editor, Jared Mullane.

“This is made possible through a solar and battery system that provides 70 megawatts of power generation per annum, plus a combined 324 kilowatt hours of storage capacity, enough to meet the entire power load of the complex at average usage for over five hours. Approximately 45 per cent of the complex’s overall power load is claimed to be met by carbon free electricity that’s generated and stored onsite.”

“Our judging panel were impressed by Energy Locals’ commitment to sustainable change delivered through their efforts and actions in increasing uptake of battery and solar energy in Australia.”

Energy Locals noted in its submission that it is committed to overcoming problems that may prevent other providers from executing or undertaking such initiatives. The retailer also stated this endeavour could not have been achieved without support from a range of stakeholders to ensure a clear pathway installing the solar and battery system without any disruption to the occupants within the apartment complex.

Energy Locals is an Australian-owned electricity provider that gives its retail and business customers access to cheaper wholesale rates in exchange for a monthly membership fee. All of its plans are certified 100% carbon neutral at no extra cost.

Discover what you can save

We’re making energy cheap, clean, and fair. Join to get carbon offsets for all your usage and some of the lowest rates in the market.